Did you see the most expensive mobile phones ever built in the world in 2021? Do you know what is inevitably the most necessary and most used gadget of the 21st century? There is only one name for that, the smart assistant you carry with you all the time, mobile phones. The world of phones is getting better day by day and the manufacturers compete in providing the latest features as well as adding new dimensions of luxury.

Here is the most expensive mobile phones in the world in 2021 including price, brands, metals, designers, users, locations, etc.

Behold, the most expensive and luxury phone in the world, The Falcon Supernova iPhone 6 Pink diamond! It is a customized model of iPhone 6 designed by US luxury brand Falcon. This gadget is constituted with gemstone and premium materials, fitted with 24-carat gold, rose gold or platinum case. Before settling on pink for the latest model it had three different colors. You can go for its cheaper versions such as Orange Diamond and Blue Diamond. The only person having it is Nita Ambani, the respected wife of Asia’s richest man, Mukesh Ambani.

Surprisingly, the most expensive and luxury phone in the world in 2019 is valued more than five times the price of the second of the list. Stuart Hughes again manages to amaze the world with his other majestic creation iPhone 4S Elite Gold. This gadget contains 500 diamonds of over 100 carats. An exciting feature of this phone is the 24-carat gold that covers the rear panel and the Apple logo, in addition to 53 more diamonds around the area. And guess what, it has a chest which contains a Platinum block with pieces of original dinosaur bone including other preciously rare stones. 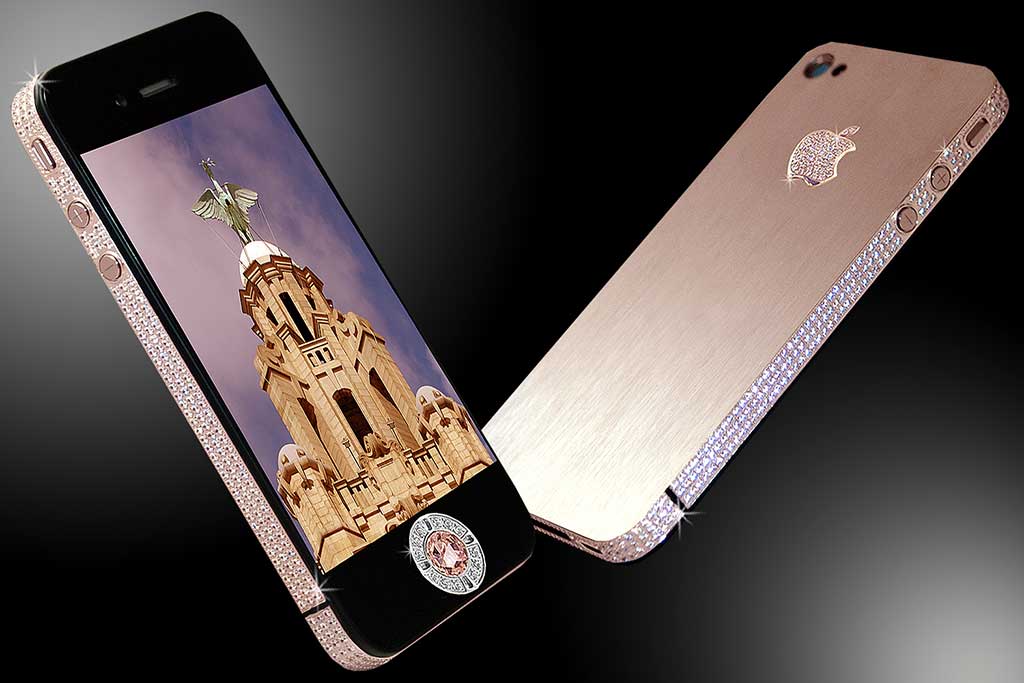 This handset designed by Stuart Hughes is among the top 3 of the most expensive and luxury phone in 2019. This model has 500 diamonds making it a total of 100 carats. The logo of Apple has 53 diamonds and its start button is constituted by a rare 7.4-carat single-cut diamond. The chest of this gadget is made of a single block of Granite which weighs 7 kilograms.

This luxury handset is one of the most prestigious gadgets designed by British designer Stuart Hughes and his company Goldstriker. It contains 271 grams of 22-carat pure solid gold, more than 200 diamonds including 53 used in the logo of Apple and 7.1-carat diamond is featured in the start button. The chest of this handset features a block of granite as well. It was initially made for an Australian businessman and since it stood as one of the most expensive and luxury phones in the world.

Australian Jeweler Peter Aloisson again managed to mesmerize us by his other amazing creation Apple iPhone Kings Button. This phone is a true jewel. It contains 18 karats yellow, white and rose gold. The white gold strip contains a whopping 138 brilliant-cut diamonds. Its start button features 6.6-carat diamonds. With this phone being added iPhone took another majestic step to its road to ultimate glory.

Le Million model of the Swiss premium luxury mobile phone manufacturing company is probably the most costly gadget created by them. It has a unique shape which adds a significant attraction to its appearance. This handset once was on the Guinness Book of World Records as the most expensive phone globally. It is made with 18 karats white gold and also contains 120 carats of VVS-1 diamonds. It has a 2-megapixel camera and 2 GB internal memory. Though it’s no longer the most expensive phone it’s still among the top of the list and has maintained popularity around the globe.

This device is designed with a solid platinum and rose gold logo. The cell phone consists of 50 diamonds including 10 rare blue diamonds. The navigation key is made of rose gold and features 28 round cut diamonds. This phone is quite different from the others with its powerful encryption technology. The wooden decorations of the phone are made of hand-polished Macassar ebony. This phone is based on CE Window.

Gresso is known for its luxurious and incredibly expensive cell phones but it entered into a whole new level by introducing the Luxor Las Vegas Jackpot. This million-dollar gadget is made of several black diamonds and over 180 grams of gold. The black panel is made of one of the oldest and most expensive wood in the world which was extracted from an African tree with over 200 years of existence. Its keypad consists of 17 manually polished and laser etched sapphires weighing 32k.

Let’s see: Most Luxurious Watch Brands in the World in 2021 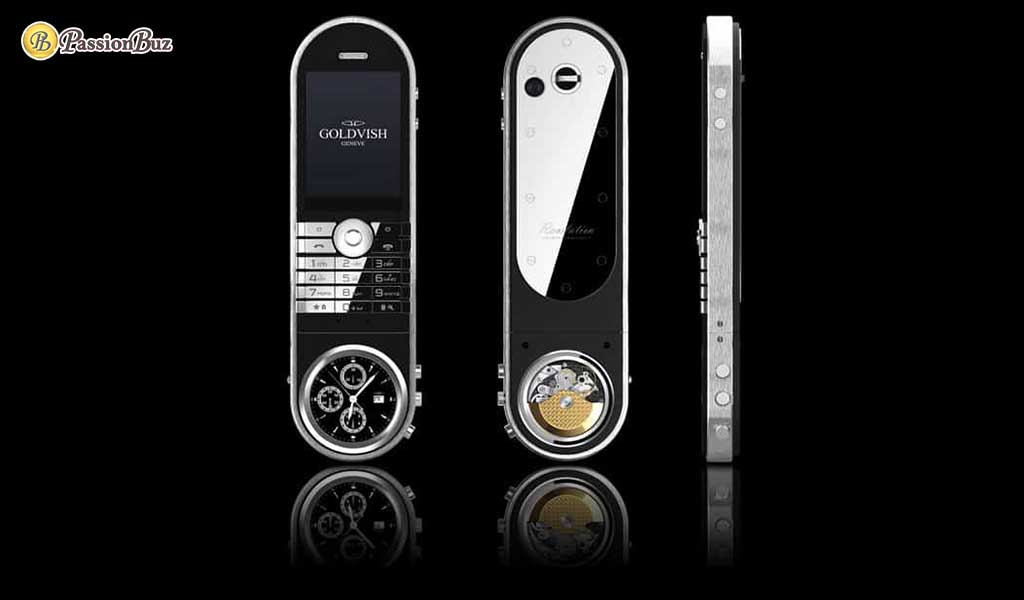 Goldvish Revolution also holds a top position as the world’s most expensive and luxurious phone ever! The phone is a breed with a weird combination of Mobiado and Motorola Aura. This luxurious device possesses a mechanical watch (which is its coolest part) with a cellphone in the same unit. The device is manufactured with immensely sparkling gold and diamonds. Giving the most stylish concept ever this phone is designed extraordinarily. The phone has a decent shape feature with some crazy spectaculars. Hitting the Guinness World record Goldvish has launched their Revolution version of candybar that is also unique and unparalleled.

This phone was created by the joint venture of the mobile phone brand Vertu and the luxury jewelry house Bucheron. They produced the world’s first high jewelry limited cell phones out of gold and precious stones. Vertu Signature Cobra is the first handset to cost less than a million in the list of the topmost expensive and luxury phones. It is a typical cell phone covered with gold and other gemstones. The best part is that the buyers can order it in different designs depending on their interests.

The design of the Black Diamond VIPN smartphone was initially based on Sony Ericsson but it is available through the company named VPN. This smartphone is different from the other expensive and luxurious smartphones with its rather vintage outlook. This phone consists of a gold and gemstone cover with an expensive black diamond. With 4 megapixel camera, OLED display, intuitive touchscreen user interface and 128 MB internal memory this phone upholds the prestige of the aristocratic bygone era of previous smartphones.

See more: Expensive Laptops Ever Built in the World till 2021 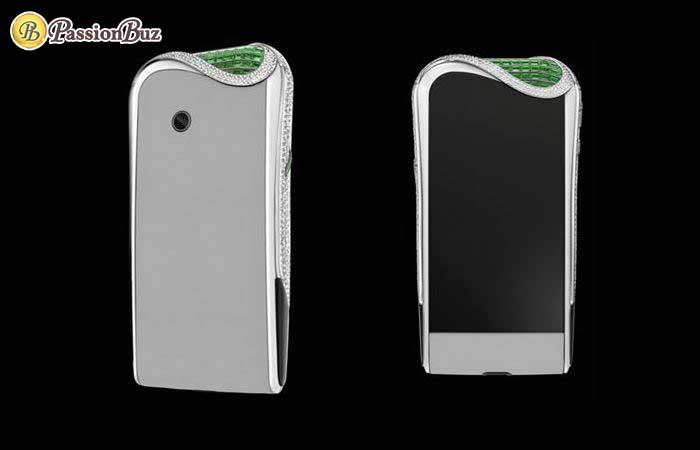 With 18k gold pieces Savelli Emerald Night is another most expensive phone ever in the world. Among all the eleven different models of Savelli, the Emerald Night is literally slaying according to its features. This lavish device is manufactured basically targeting the trendy women out there who love wearing luxury. The device is unbelievably handcrafted with four hundred of mix and baguette cut emeralds. The device is empowered with a screen of ultra bombay sapphire. Releasing only some limited versions this little splendor device is a dream phone of a woman. 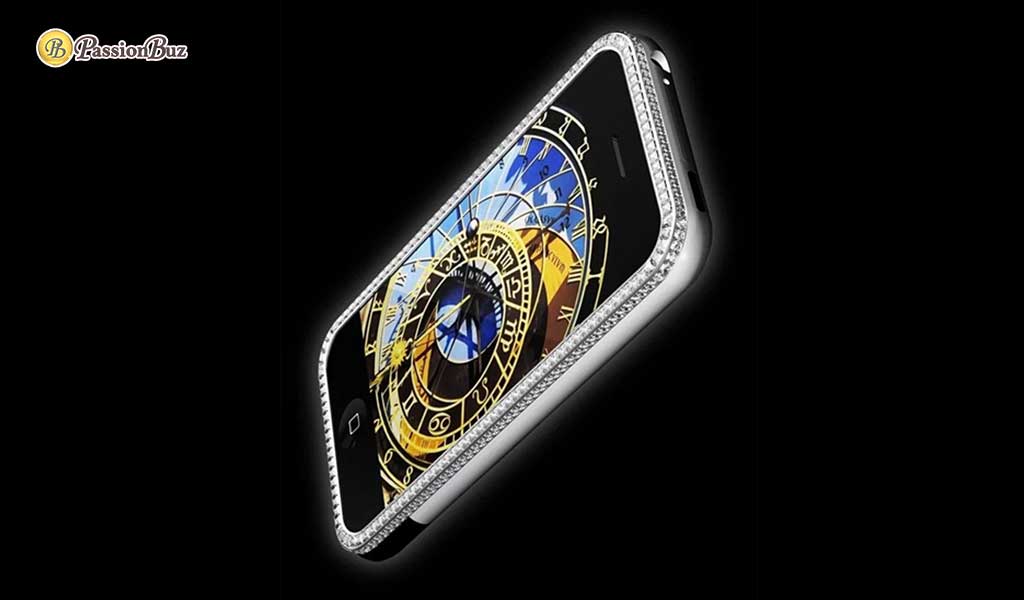 The owner of this phone is a Russian businessman, who surely loves to have things customized and lavish in appearance. The feature of the phone is almost the same as the other handset of the iPhone. Still nothing can beat the high appearance and high price tag of the phone. 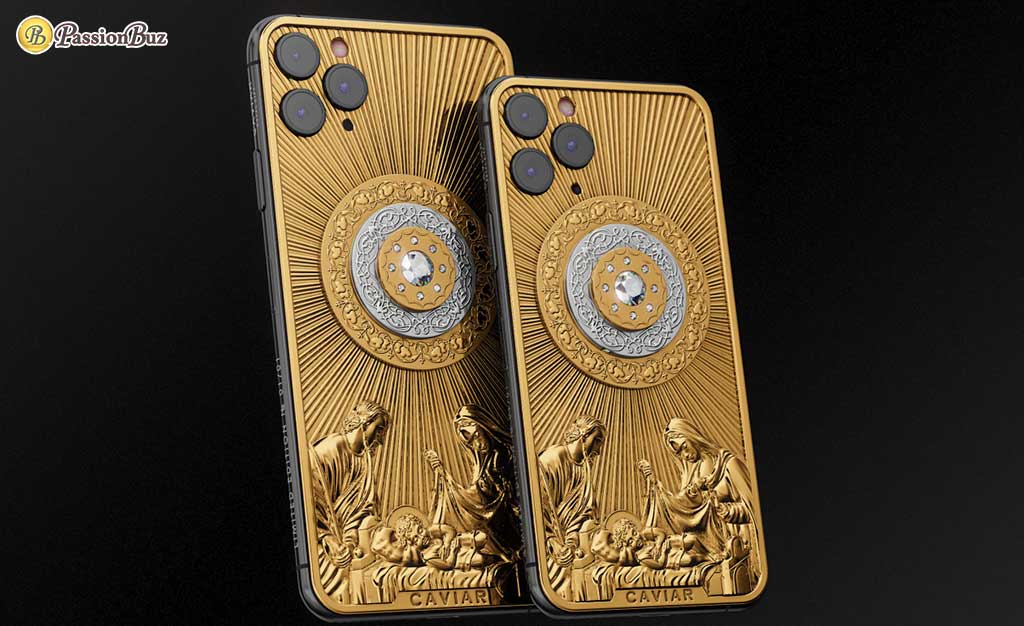 This Caviar iphone 11 pro max is a wonder because the diamond at the middle of the back of the phone symbolizes a great deal of things. Basically, the phone was invented to represent Jesus Christ being guided by the Star of Bethlehem which is the main theme of the whole phone structure. The phone appears with a sophisticated notion and its whole back part is encrusted with gold. Even the theme evokes a deep desire for an aesthetic environment. The center has the brightest diamond and it is worth 3 carats. The frame is ended with diamonds and golden encrust. 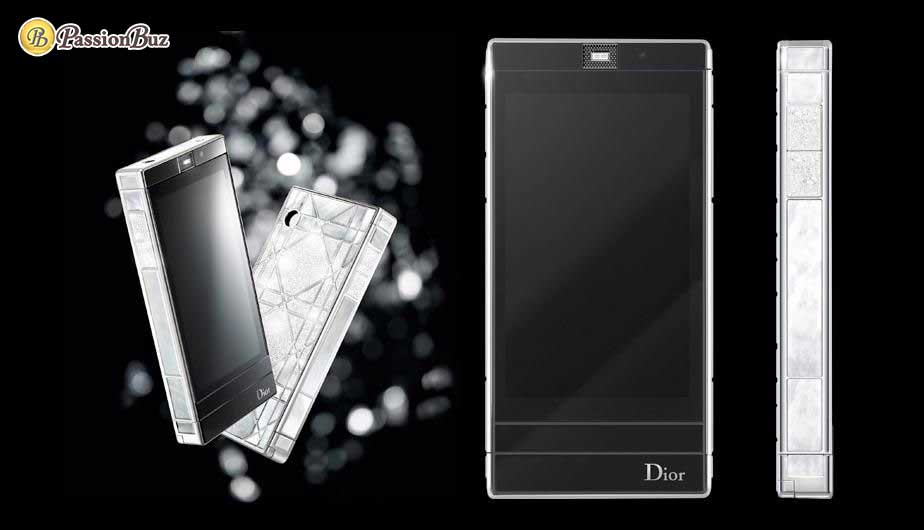 Another most expensive phone is Dior Reverie that is designed for the luxury and fashion conscious people. With a comprehensive amount of apps and menus this phone offers you a multi-touch LED flat screen. The internal technology of the device is praiseworthy. The phone is engineered with animations and galleries.

The Dior Reverie allows its user to have the satisfaction of using the finest and incredible materials possible. With a craftsmanship of supreme level the device empowers materials like diamond, gold, sapphire crystal, pearl and what not! Buying a Dior Reverie having a feature of unibody design is like a dream come true!

These phones have introduced a whole new dimension of luxury that can be sought. Offering according to its necessities these phones add a more aristocratic prestige in its usage. And shows how beautiful piece of the art technology can offer and has yet to offer.