Finally we have published the list of top 15 tourist attractions in USA in 2021. Who doesn’t want to visit America? This is one of the most luxurious dreams of the common people around the world. People from different countries just like to have a visit there for the experience of modern life, culture, entertainment, scientific development, expensive cars, luxurious apartments and much more like this. At the same time some advance people from the world and the country itself like to visit the most attractive tourist places of USA.

An ancient place which is 5-6 million years old situated in Arizona State, Colorado river flows in the Canyon. The canyon is 447 km long and the wide is 29 km. Another most attractive part is the depth of the canyon which is 6093 feet. Visitors do not need any special occasion to visit this piece of heaven on the Earth. The place is the best place for hunting.

Most of the visitors are the Native Americans. The south rim is open all year round, with weather permitting a visitor can easily roam at the south rim. North Rim is open from mid-May to mid of the October. Sight seeing is not only the main activities of the visitors, rather they go for rafting, hiking, running, helicopter tours and much more.

Nowadays the main attraction of this beautiful place has become the Grand Canyon skywalk which is basically a bridge made of high-quality glass. It is a 400 km road distance from the Grand Canyon. The Grand Canyon is not actually the biggest or deepest Canyon of the world but still people come here for its mesmerizing sightseeing.

The world of gambling, is the best phrase to describe the city of Las Vegas in Nevada State. The main attraction of the tourists is its’ Casinos. The casinos are so luxurious and lucrative at the same time. Shopping, dining, and roaming the narrow alleys are some common activities of the Visitors. The city is the destination for you if you want to enjoy the beauty of night. As this is  a city where night life can be enjoyed at its best. At night the whole city looks like an illuminated plate where the glittering neon lights look like fireflies. Vegas is enriched with unique museums. The museum shows the history of the city with the touch of modern glam. The cooler winter temperature is the best weather for sight-seeing in Las Vegas.

Three distinct sets of falls named American Falls, Horseshoe Fall and Bridal Veils Fall are actually Niagara Fall. Its height is 167 ft. situated between Canada and New York. The biggest fall at Horseshoe is shared between the lands of these two provinces. And the other two are entirely situated in the USA. This is one of the best attractions to the tourists as 30 million people visit there per year. 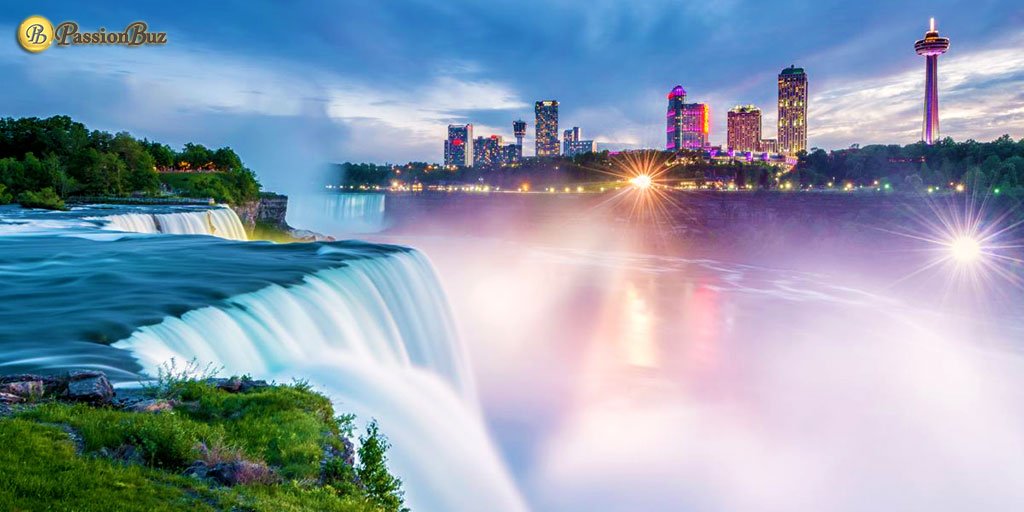 The whole natural setting of the place is outstanding.  Summer time is the best time to feel the beauty of a day and a night as well. You can stay at the Fallsview Casino Resort, where the beauty of falls and the night in the casino both be enjoyed. The Maid of the Mist boat cruising is also very famous here. In the night time the beautiful artificial lights make the fall best to enjoy with heavenly bliss.

The largest statue in the world which is carrying the icon and symbol of not only the United States but also the world. This is a gift from France to the people of the USA in 1886. Its height is 305 feet from the ground. The view of the statue is extraordinary.  3.5 million People visit the Statue almost every year. Visitors can have three types of tickets to visit this place. They are Crown tickets, Pedestal tickets and Ground tickets. Visiting the USA without seeing this Statue is truly a blunder. You can also visit Ellis Island which will also be a worth money tour near the statue. Basically the statue represents the USA.

Situated in Washington Dc, this white palace is one of the most attractions for tourists. It is basically the home of the president of the USA. Except for George Washington, all the presidents had lived there. It was built in 1792. The entry to this house has become very difficult after the 9/11 incident, and today only tours of 10 people and higher can be arranged up to six months in advance through your Congressman or the US Ambassador of your country. This is such a lengthy process. Still, tourists desire to visit this historical white palace.

The oldest national park of USA. It is in Montana, Idaho and Wyoming. The park was built to preserve the area of hot springs and a vast number of geysers. It has incredible thermal area, rugged beauty and wildlife.

A big old volcano, Yellowstone National Park, is home to a stunning view and amazing natural occurrences. Geysers and hot springs, as well as breathtaking waterfalls along the Yellowstone River, are only a few of the landmarks that attract tens of thousands of visitors each year.

This stone park is a free roaming place for antelope, bison, sheep, black and grizzly bears. The Yellowstone river also craves visitors to visit this place.

The symbol of San Francisco which connects San Francisco bay with Pacific Ocean. It is a 1.6 km long bridge. The bridge looks different in summer and winter.

When it was completed in 1937, the Golden Gate Bridge became an internationally known San Francisco and California landmark and was the longest suspension bridge in the world. In order that the bridge is easy to visualize through the thick fog which frequently walls the bridge, the popular red-orange color was chosen.  The red lead color of the bridge makes it a more photographed one. The colorful beauty of the bridge attracts tourists to visit this place.

This is a place for exhausted people as they can have a tranquil river walk with scenic beauty. Situated in San Antonio, Texas.  Every year millions of tourists visit the place because of its unique pedestrian street. Apart from the city vehicles one can enjoy plenty of restaurants at the edge of the river side. Traditional shops, bars, restaurants, art and what not are present there. In a nutshell it looks so tranquil which provides peace.

A tropical island located at the southern coast of Florida which is 120 mile long. These 120 mile tropical beaches curved from around Florida base by a series of bridges linked to the mainland.

It has a lot of bridges among them the Seven Mile Bridge is the main attraction of the tourists. Many films have been filmed there.The Seven Mile Bridge in the Lower Keys, the most beautiful bridge, has been used in several films, including True Lies and Fast and Furious. US Highway 1, also known as that of the “Overseas Highway,” connects Key Largo, Islamorada, Marathon, the Lower Keys, and Key West, the most remote and famous of the islands. The lined coconut trees with the glittering wave and indigo sky make it more fascinating to the tourists.

A perfect tourist destination. The most attractive beach of the Pacific.  This gives the tourists both the vibes of a tropical island and modern life. The scenic beauty of this beach is praiseworthy. A cold wind with the palm trees refreshes your mind. It is the best place for monotonic tourists. Shopping, luxurious dining, spa, hotels make it more convenient to the tourists.

Walt Disney World Resort is a 47-mile hotel offering four parks: the Epcot, Kingdom Park, the Magic, the Animal Kingdom Park in Disney or the Hollywood Studios in Disney and two water parks: Disney Beach Blizzard and Typhoon Lagoon in Disney and along with that it has  more than 20 resort hotels.

Guests will experience Disney magic every time they visit, with immersive journeys, animal encounters, magic attractions, catering, shopping and almost 60.000 cast members in over 3,000 roles. This massive amusement park in Orlando is America’s biggest family destination, serving both children and adults for decades.

Walt Disney World was opened in 1971 and over the years has maintained its importance and appeal to children and also to many adults. In addition to the numerous theme parks, Walt Disney World Resort has water parks, shopping and plays in Disney Centre, and many more, ranging from fine dining to golf. You can spend a day or a week in this area.

The place is more like a take of city life. The heart of Midtown Manhattan is bustling Times Square, famous for its dazzling billboards, New Year’s Eve celebration, and endless crowds of people.

In normal times, this intersection is really about the momentum you feel when you stand on the street as a taxi rushes by and lights blow across the square. Although it is fun to visit during the day, the best time to see it is at night to get the full effect.

Most tourists’ hearts are in the Wizarding World of Harry Potter and Universal’s Volcano Bay which  is available at all hotel resorts. This is a place where both children and adults enjoy at their best.

Along with that,  Hard Rock Hotel, the Loews Portofino Bay Hotel and Loews Royal Pacific Resort have an amazing offer of free Express Pass. The pass can be used for some selected rides at Universal’s Islands of Adventure and  Universal Studios Florida. This is one of the  world’s most visited resorts with 21 million people visiting in 2017.

Most tourists’ hearts are in the Wizarding World of Harry Potter and Universal’s Volcano Bay which  is available at all hotel resorts. This is a place where both children and adults enjoy at their best.

Along with that,  Hard Rock Hotel, the Loews Portofino Bay Hotel and Loews Royal Pacific Resort have an amazing offer of free Express Pass. The pass can be used for some selected rides at Universal’s Islands of Adventure and  Universal Studios Florida. This is one of the  world’s most visited resorts with 21 million people visiting in 2017.

Mount Rushmore National Memorial is located in Keystone, South Dakota, and is based on a monumental sculpture set into the granite face of Mount Rushmore. Gutzon Borglum, a sculptor, designed the sculpture and oversaw its construction with the aid of his uncle, named, Lincoln Borglum, from 1927 to 1941.

Presidents George Washington , Thomas Jefferson,  Theodore Roosevelt, and Abraham Lincoln (1809–1865) are represented by 60-foot (18-meter) heads, as recommended by Borglum. The four presidents stand with the dignity of the country.

Tourism is the second largest industry in South Dakota, and Mount Rushmore is the top attraction of the state. The park was visited by 2,185,447 people only in 2012.

A modern, immersive museum is now opened on the second floor, in order to attract additional tourists into the most prominent skyscraper of New York City and one of the most beautiful landmarks in the Americas.

In the 10,000 sq. ft. area over three years, the Landlord Empire State Realty Trusts has invested $164 million to try to leverage the country’s tourism capital, a famous observation deck that has become increasingly competitive by new buildings.

The Architecture, Technology and Entertainment Industries It also shows that in the rapid evolution of the Manhattan skyline of the 21st century, the building itself is being transformed in a museum building.